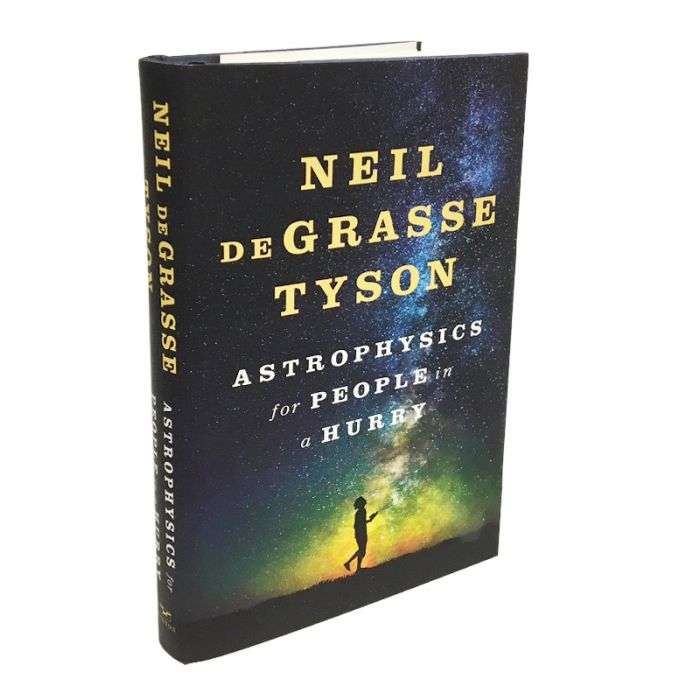 That’s not a number or concept that our brains are really capable of understanding, but what we do get is that it’s insanely big.

Thanks to Neil Degrasse Tyson, this book simultaneously makes you feel absolutely tiny and absolutely significant.

A quick read that took two or three days to get through (with several pauses to swallow the mind-boggling nature of astrophysics), there were several parts I never want to forget. Here they are:

It’s soaring through space with a gold disc holding the layout of the solar system, our place in the Milky Way, and is the best chance that an alien species would be able to locate us if found.

It also has a recording of a human heartbeat, whales singing, and the world’s greatest music (yes, there’s Mozart).

Dark Matter Makes Up 85% of the Matter in the Universe, and We Have No Clue What it is

By “we” I mean scientists, of course, I have no idea what it is. We can’t see it, can’t detect it, but know it’s there. Remember that big number with a lot of zeros at the start of this post? That’s how many stars there are. That doesn’t count planets or asteroids. All of that combined is only fifteen percent of matter. And we can’t see or identify anything else!

We can measure it through gravity. We know how the universal law of gravity works, and for objects to move the way that they do in the deep universe, gravity from dark matter must be there.

The paragraph I particularly enjoy discusses hypothetical places dark matter can come from. “Could we be seeing the effects of forces from another dimension? Are we feeling the ordinary gravity of ordinary matter crossing the membrane of a phantom universe adjacent to ours?” I sure hope so.

In a later chapter, Neil touches on the fact that we usually think something is unique until we find out time and time again that it isn’t. We thought the Earth was unique until other rocks and planets orbiting stars were discovered. The same with the Sun, with our solar system, our galaxy, etc. So why should our universe be unique?

Dark Energy Will Expand Everything, Forever

Similar to Dark Matter, we don’t really know what it is. What we do know is that it’s pushing everything away from each other, a sort of anti-gravity that never stops. In fact, it accelerates, always has, and seemingly always will.

What this means is that many many years in the future, gazing out as far as possible from Earth, you will come up dry. Everything will be so incredibly far away, it will be unobservable. Gone from our view, forever.

Neil’s recurring nightmare is this: “Are we, too, missing some basic pieces of the universe that once were?”

The Cosmic Perspective, and Why You Should Adopt it

My favorite part of the book revolves around the cosmic perspective.

They say that astronauts who have the great fortune to see the Earth from space come back with an incredible sense of unity. Their minds really get that we are all the same, we walk this Earth together with other humans, plants, animals, made up of elements that make up everything else there is, everywhere.

When we think so wide with our minds, about numbers we can’t count and concepts we don’t understand, we forget about the atrocities happening on Earth. People starving, homeless, and disabled without help. Humans killing each other over imaginary borders, religion and God, politics and “power”.

What hits me the most is how careless we are about the one planet we have. We are so incredibly fortunate to have everything align exactly right for us to be alive. We have a star close enough to give us warmth but far enough to not burn us. Huge oceans cover our planet, abundant trees, incredible but modest landscapes, an atmosphere that we can breathe with our own organs while it protects us. All of this amazing fortune, and we throw it all away for convenience.

“… Powerful people rarely do all they can to help those who cannot help themselves.”

By Thinking Bigger, We can Reframe our Problems

“… however big the world is – in our hearts, our minds, and our outsized digital maps – the universe is even bigger. A depressing thought to some, but a liberating thought to me.”

A child thinks little things are a big deal. A crushed toy, spilled milk, and not being able to buy a candy bar are all the end of the world. But are they? Of course not!

The same thing can be said for most adults. We have, as Neil puts it, a “collective immaturity of view”. We tell children the world doesn’t revolve around them, yet act as if the world revolves around humans, human problems, and technological solutions.

“Now imagine a world in which everyone, but especially people with power and influencer, holds an expanded view of our place in the cosmos. With that perspective, our problems would shrink – or never arise at all – and we could celebrate our earthly differences while shunning the behavior of our predecessors who slaughtered one another because of them.”

Our Tiny Part in the Universe Should Make us Feel Big, Not Small

Yes, everything beyond our city, country, continent, planet, and solar system is truly endless. But the fact that we are able to know that is pretty damn marvelous. Neil explains that if all of this makes you feel small, it is your ego fed by delusions of significance, that frankly, are false.

Human culture is based on the undeniable fact that humans are more important than everything else. We are not. We are made of the same elements, the same matter, as literally everything else ever.

Did you know that “… more bacteria live in one centimeter of my colon than the number of people who have ever existed in the world”? That the earliest single-celled organisms appeared on Earth 4 billion years ago?

Small genetic differences are all that separate humans from chimps. These small differences let us communicate, think critically, do math and science and write. Chimpanzees can do none of these, not with any form of complexity at least.

What’s the next step up in intelligence from us? Beings in that the lowest form of intelligence is the absolute pinnacle of human achievement?

We are so Much More Connected than we Realize

The finale of the book really brings everything together for me, and almost makes my body tingle when I think deeply about what is said.

Neil tells us that there are more molecules of water in just one cup than there are cups of water in all the oceans on Earth. Take a pause, and think about that.

“No way around it: some of the water you just drank passed through the kidneys of Socrates, Genghis Khan, and Joan of Arc.”

Water is not the only amazing connector of Earthly beings. Let’s talk air.

In a similar comparison, Neil teaches us that, “A single breathful draws in more air molecules than there are breathfuls of air in Earth’s entire atmosphere”.

Does that mean we breathe the exact same air as everyone before us? Take a deep breath. Yes, “some of the air you just breathed passed through the lungs of Napoleon, Beethoven, Lincoln, and Billy the Kid.”

Hydrogen, oxygen, carbon, and nitrogen, are life. These, formed in the fiery explosions of balls of gas, spread across anything and everything, are us. We are the universe, and the universe is us.

Did you read Astrophysics for People in a Hurry? Do you have a different perspective, an addition to mine, a contradiction, a comment? Let me know!